Here Are Some Fascinating Stories That Were Left Out Of The Bible
Sponsored · May 18, 2022 · BabylonBee.com

The Bible is God's grand message to mankind. It leads us to Christ and and gives us everything we need to be complete, equipped for every good work. But did you know the people mentioned in its pages were real people? It's true! And researchers believe they'd uncovered some fascinating stories about notable biblical figures the Holy Spirit didn't see fit to record.

Here are just a few:

1) When Noah failed to bring his map of the world onto the ark and got lost: He didn't hear the end of it from Mrs. Noah for 40 days and 40 nights.

2) The story of Jesus' little known 13th apostle Todd. He wore a hat.

3) When King Saul packed the courts: He didn't like what the prophet Samuel was saying.

4) The nine lepers who didn't return to thank Jesus later sent him a lovely Applebee's gift card: The Lord re-gifted the card to Lazarus who later died from severe food poisoning.

5) That time Peter took on a dozen Roman soldiers in an epic one-shot hallway fight scene: Awesome! Just not of doctrinal significance.

7) When Peter challenged John to a push-up contest after losing the foot race to the tomb: He lost.

8) Since Adam was the first man, he had to invent a ton of stuff but he had no patent office to protect his ideas and they were all stolen: Sad!

9) That time King Solomon had to sleep outside because he accidentally called his 1,200th wife by his 34th wife's name: Boy, was his face red!

10) David missed Goliath's head with his sling the first 12 times and kept saying "Wait a minute, that one didn't count!": If Goliath didn't laugh so much things could have gone very differently.

11) Balaam's donkey kept talking and went on many adventures: He went on to inspire hit video game The Prince of Persia.

12) When Elijah ratioed Israel on Twitter: Then he was banned. Sad!

13) The harrowing tale of Adam and Eve attempting to homeschool all 327 of their kids: Total disaster.

14) The time Abraham had to learn how to change a diaper at age 100: Unpleasant.

15) Joshua's kids got to stay up super late on the day the sun stood still: They were so cranky the next day! UGH!

16) When Jonah's big fish was almost eaten by a bigger fish on their way to speak to the Gungans of Naboo: It's not a tale the prophets would tell you.

NOT SATIRE: Learn the real story of Scripture. iBIBLE, the world's first visual and interactive Bible, uses only the Bible for its scripts - nothing added, nothing changed. Free to the world, iBIBLE presents the Divine narrative of Scripture. Support iBIBLE and receive TWO copies of the highly acclaimed iBIBLE Storybook, Volume 1. Featuring illustrations from iBIBLE, this vibrant volume is sure to help readers of all ages understand the beginnings of the one true narrative of Scripture.

Prayerfully consider a contribution, and you will receive TWO copies of the 10" square, hardcover, 96-page storybook, complete with the stories of Creation, the Fall, and Cain and Abel - one to keep, and one to share! Get your kids and grandkids interested in the Word of God with iBIBLE. 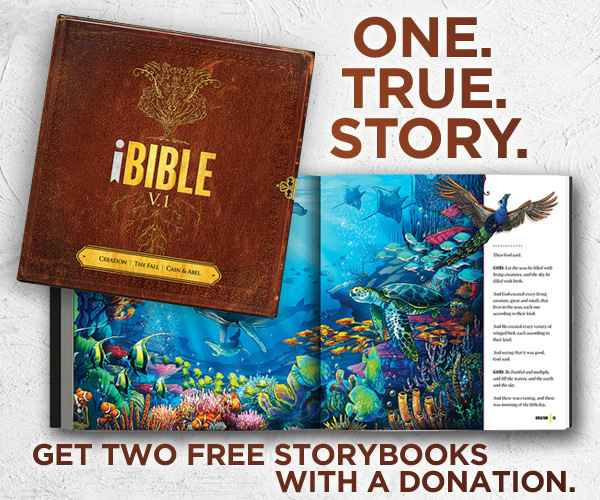