It's that time of year again - when the mystic oracles at The Babylon Bee tell you what will happen in the next year with 100% accuracy! Will 2023 be better than this year? You decide!

January 1 - Millions set out to read their entire Bible

April 4 - The war in Ukraine ends

April 5 - The war in Taiwan begins

May 1 - Obama releases a new memoir

May 12 - No one shows up to work across America. Also, all Nintendo Switches are sold out for some reason

May 19 - Webster changes the definition of gender

August 8 - Dr. Fauci comes out of retirement after new COVID strain leaks from a lab

December 5 - Disney announces Phase 5 of the Marvel Universe will be Brie Larson giving a series of 2-hour TED talks on misogyny.

December 10 - A late-night host says something funny (hey, we can dream right?)

NOT SATIRE: Before you go, here's one more 2023 prediction that you won't want to miss…

As a Babylon Bee reader, you know that primary education is one of the ways that young minds are shaped. In the early years, children learn how to view the world. In recent years, progressive public school administrators and teachers have capitalized on this, teaching kids outright falsehoods like "socialism is good", "America is shameful", and many more.

This is not good. And I think one of the best ways to teach kids what is true is through children's books — specifically the Tuttle Twins series, which teaches kids about free markets, liberty, America's founding, and much more.

That's why I'd like to predict that we'll put a set of Tuttle Twins books in every public school library in America. And by doing so, kids will finally have the chance to love liberty and understand how the government should work.

Even better - my friends at Moms for Liberty have stepped up and offered to hand deliver them to ensure we don't miss this opportunity.

But in order for my prediction to come true, we need your help to make it happen. Would you be a part of the team that's putting a set of Tuttle Twins books in every public school library in America by making a donation before December 31st at midnight?

By doing so, you will help more kids develop a love for America at an early age. 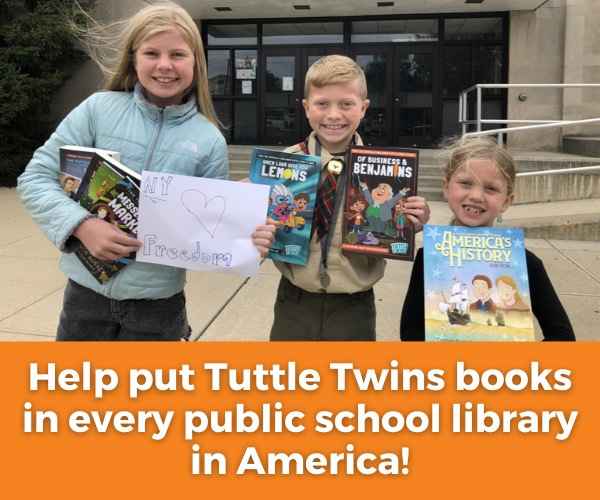 There are 253 comments on this article.