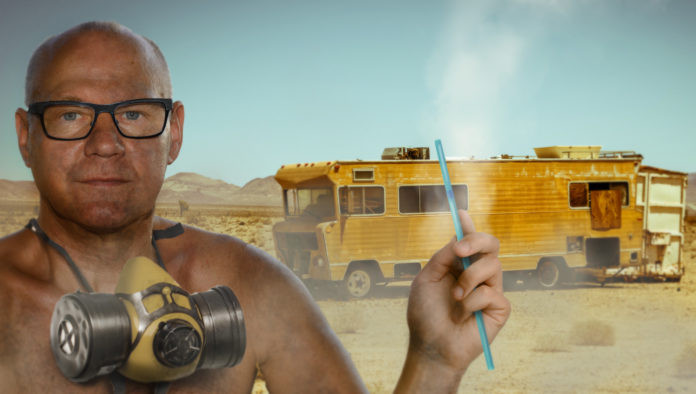 Strapped for cash and down on his luck, Santa Barbara high school chemistry teacher, Winston Silver found himself in a desperate situation. He was looking for any opportunity to use his teaching or chemistry skills to bring his family some much-needed additional income. When the city of Santa Barbara passed a ban on plastic straws, Silver noticed that plastic straws were now being sold on the black market at an incredibly high cost but inferior quality.

“My brother-in-law is a cop and he busted these straw dealers down on Monte Vista Ave. I got a glimpse of their product. Pathetic, flimsy, no color, impure plastic. Then I found out what they were going for.” A small case of straws can easily sell for tens of thousands of dollars in this new high-scarcity market. “I knew I could easily create a superior product,” Silver said. “They’re going to drink from straws anyway—I might as well make them a better product.”

Silver bought a used RV and drove it into the Mojave Desert to make his first batch of superior drinking straws. What he created was a crystal clear, sturdy, bendy, bright-blue drinking straw. “99.1% chemically pure blue plastic,” Silver said with pride. “Far superior to anything out there right now.” He named his product “Sky Blue Straws,” and they have taken the streets of Santa Barbara by storm, showing up in empty Big Gulp cups at crime scenes all over town, baffling police and angering straw dealers with inferior products.

When straw dealing kingpin Tuccio “Crazy Straw” Gonzalez took his first sip of Coke Zero from one of Silver’s “Sky Blue Straws,” his reaction was a sudden outburst, repeatedly saying, “Tight! Tight! Tight!” He immediately wanted to go into business with the chemistry teacher.

Upon increasing production, Winston Silver has formed an unusual alliance with one of his old students, Jasper Pinkston. “Mr. Silver use to send me to detention all the time for spit wads back in class, yo,” Pinkston said. “Now we makin’ product that pops off the tightest spit wads in the hood!” While Silver and Pinkston get into all kind of hijinks because of their widely opposing personalities, they balance each other out and have formed something of a father-son bond.

At press time, Silver was rumored to have become dangerously tangled up in the drinking straw black market, but his lawyer, Seth Goodwin, said that his client had no further comments at this time.

Pelosi: 'Any Child Who Somehow Escaped Both Abortion And Infanticide Has Earned The Right To Vote'