Jesus is literally all over the Marvel movies. Everywhere you turn, there's another Christ figure. And as we all know, the best place to get our theology is from Marvel films. Here are ten Marvel movies and the Christ figure in each. How many can you guess?

1. Guardians of the Galaxy - The Jesus figure here is Chris Pratt's Walkman, which indwells his soul and inspires him to defeat Ronan the Accuser, who represents Satan, obviously.

2. Ant-Man - It's everyone's favorite flying insect steed, Ant-thony, who took a bullet to save Paul Rudd from certain death.

3. Captain Marvel - The Christ figure here is you, the viewer, who suffered through two hours of this movie so you could tell others how bad it is and they wouldn't have to suffer the same fate. Hero!

4. Guardians of the Galaxy 2 - It's the big Pac-Man that Chris Pratt turns into in a beautiful picture of the incarnation and hypostatic union. He's 100% Pratt and 100% Pac.

6. Avengers: Infinity War - Thanos represents Jesus here, as he snaps and raptures half the population similar to how Christ will come again and catch His church up in the clouds.

7. Spider-Man: No Way Home - The three Spider-Men represent the Trinity here. We're not sure which one is Jesus, though. More research is needed. We will just have to watch the movie a 17th time. For research.

8. Doctor Strange - You might think it's Doctor Strange, who sacrifices himself for mankind. But you'd be wrong. It's actually the Cloak of Levitation, which clothes Strange much as we are clothed in Christ's righteousness. You dummy!

9. Iron Man 3 - All 300 of the Iron Man suits flying around during that crazy final battle represent a separate Christ figure.

10. Thor: Ragnarok - And finally, the Christ figure here is really powerful: it's Jeff Goldblum, who warns humanity against cloning dinosaurs just like Jesus warns us not to sin. Powerful stuff.

Imagine if there were a FUN way to raise your kid's interest in God by using Hollywood's biggest megahit movies to highlight the beauty of Christ. What if you could reveal truths of the Gospel to nonbelievers by referencing stories they enjoy while also learning about the evidence for Christianity and getting answers to its toughest objections?

You can! You'll see how when you get the "gripping" and "powerful" new book by Dr. Frank and Zach Turek titled Hollywood Heroes: How Your Favorite Movies Reveal God. Start having fun, intentional conversations with the movie buffs in your life about the one hero who truly saved them from everything. Pre-order TODAY!

PLUS! Submit your pre-order confirmation number at HollywoodHeroesBook.com and receive the AUDIOBOOK FREE! Offer ENDS MAY 3rd! 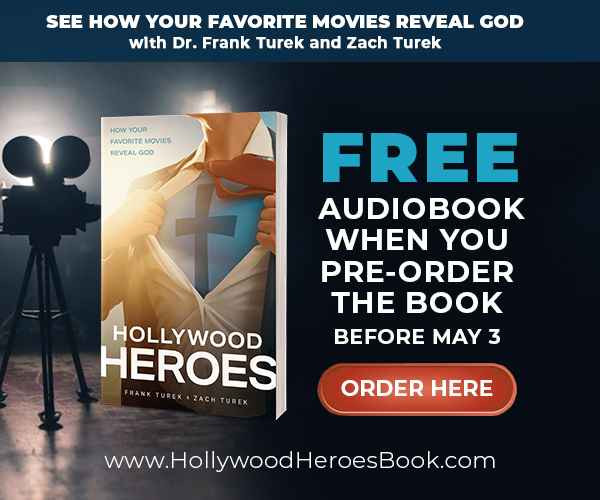